…and also an orange, banana, pear, lemon and cherries! 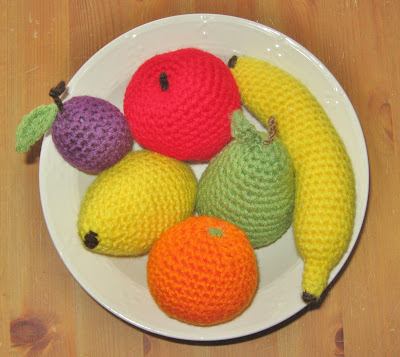 While I was sick over the weekend I realized that I haven’t added any fruits to Tiny Tart’s play kitchen in quite some time. Since making these little cuties is so quick and easy, I figured they were just the project I needed to give my number a little boost.

The best part is that all of the patterns came free on the interwebs! Just look below for the links. 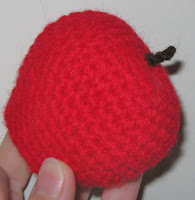 The apple (surprisingly one of the hardest shapes to figure out) came from PlanetJune. I find the easiest way to make the stem for any of these fruits is to take a length of brown (5-6 inches) and tie a knot in the center. Then just keep tying knots (overhand “cross and loop through” plain knots) one on top of the other until you have the length you need. This makes it look all bumpy and “tree branch-y” to me.

The orange is a version of Ms.Premise-Conclusion‘s Ideal Crochet Sphere pattern. She actually did the math (which I admit to not understanding!) that shows you how to make a perfectly round crochet ball. I used the 18 round pattern and my orange turned out just over 2 inches across. It’s about the size of a clementine. All you have to do is stitch on a bit of green at one end and ta da, an orange.

The lemon which also has a smaller pattern for a lime is found here at Beansprout Creations. Check out the free patterns section. She has an awesome pattern of the mouse from the “If You Give a Mouse a Cookie” Books!

The cherries are a free pattern download on Ravelry.Of corse Tiny stole these and started gnawing before I realized that they weren’t in the picture. I’ll add them after they are found in her mess of toys!

The pear came from AmigurumiGirl I just left off the face.

And unfortunately, I can’t remember where I got the pattern for the banana. I did write it down though and since I made a few modifications, I guess it is ok to share with you.  (*) is used to indicate that you should repeat the prior stitches until the end of the round. 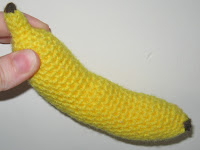 Now sew a few stitches of brown around both ends of the banana. If you’d like to add the seams just draw them on with a fabric marker.

Besides just being play food, these make great color teaching tools. I feel like Tiny understands what I mean by “yellow” when I put the lemon with the banana. Instead of thinking that a lemon is called a yellow. 😉

This site uses Akismet to reduce spam. Learn how your comment data is processed.