As I sit here typing this morning, there are snowflakes floating past my window. What the heck is going on? I thought we were finally moving into spring and now we have flurries? I guess the groundhog was wrong this year when he said spring would come early. Maybe someone should explain Global Warming to him for next year! Oh well, the warm weather will eventually come I’m sure. And hopefully none of you have started planting anything that will be too badly effected by this cold snap.

Anyway, Yesterday morning I spent the first 3.5 hours of my day sitting in the waiting room at the car dealer while they checked out (and presumably fixed) “the funny noise”. I’m sure anyone who owns a car understands the situation I’m talking about. This is especially fun when you are a woman trying to explain to a couple of guys that you think the bearing is bad because of the “humming vibration coming from the driver’s side tire”. Then they look at you funny, either because you knew a part on the car, or because you’re standing there making funny noises! Hours later they finally say “Hey, you were right, now give us $500!” (My car is old so I do this too often.)

(Disclaimer: I know absolutely nothing about cars, but I do know how to call my Dad who can usually give me some idea. He isn’t a mechanic, but he seems to be able to fix (or know what’s wrong with) almost anything. I tell him were the sound/smell/goofiness is happening and he lets me know what could be in that area that may cause that problem. This is soo helpful and amazing to me since Ant only knows where to put the gas. LoL He can build a house though so I let him slide!)

After the car was put to rights I decided I had better get a lot more stuff packed and spent the afternoon with my boxes and tape. It was such a blessing that Ant took off the morning to watch Tiny while I was with the car. I’m sure most of you can picture what 3 hrs. in a waiting room with a toddler would have been like! And, to my amazement and glee Tiny took a 4 hr. afternoon nap. It was bliss. Four hours of peace and quiet where I could pack without anyone “helping” me by spreading the contents around the house.

When my boxes were full, I even had time to work on the quiet book that I was supposed to be making this month. I was kinda put on the back burner when I started making Tiny outfits for spring, but now I’ve gotten It back out and hopefully will be able to finish a few more pages before the month is up. 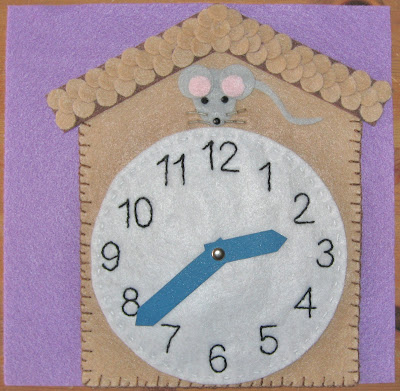 Today I’ve got the Hickory Dickory Dock page to share. This was a pretty easy one to figure out, I mean the mouse runs up a clock! “Whatever should I make?” I do really like the way that the mouse turned out though. He is just so cute peeking out the Coo-coo window. 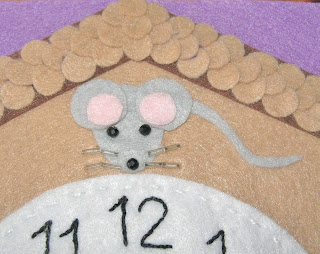 Now if I can get a repeat of yesterday’s nap time, I have 3 more pages that are really close to being finished. This book might not end up as one of those projects that get lost in the shuffle! (finger’s crossed)

This site uses Akismet to reduce spam. Learn how your comment data is processed.