I was so excited to get Story book month underway that I totally forgot that today was Tuesday and time for another recipe. Rather than doing a bunch of St. Patrick’s Day crafts like I did for Valentines, I decided to devote this month’s recipes to all things Irish (Or Irish-ish). The winner for today is… 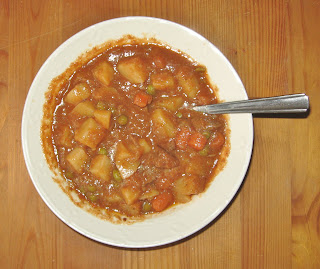 The recipe came from Martha. It is pretty much one of those “toss it in and simmer” recipes that can easily be adapted to a crock pot so you don’t even have to worry about checking the stove. If you make it as written it makes enough for 10, but it also freezes well so you can save some for later (when you don’t feel like cooking!)
Since soups and stews are some of my favorite things to make I’m trying too sneak my last 2 of the season in this month. Hopefully that will hold me over until fall comes again and Ant deems soup “acceptable” again.
Now for anyone who was also looking forward to Story Days like I was, here is a sneak peek at tomorrows project.

They weren’t finished at the point the picture was taken, so you’ll have to come back tomorrow to see the finished project!
♥Momma Tart
Running Tally:
#58 – Irish Beef and Stout Stew

One thought on “Tasty Tuesday – Irish Beef and Stout Stew”